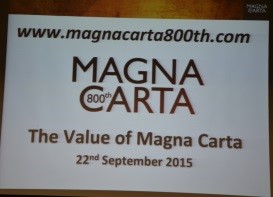 The panel aimed to bring closer the relevance of Magna Carta to the state of human rights and civil liberties in the modern age, particularly in the context of Macedonia. The 800th anniversary served as an inspiration for opening up a debate of questions relevant to young democracies as Macedonia. His Excellency Charles Garrett, the British Ambassador to Macedonia and Mr. Adnan Jashari, the Minister of Justice of Macedonia, greeted the panel, while a keynote speech was be delivered by Mr. Mark Gill, Executive Director of the Magna Carta 800th Committee. Mr. Gill, who spoke of the “Value of Magna Carta”, provided a historical insight of how Magna Carta was adjusted through the centuries and paid special attention to its enduring legacy, as well as how it has impacted the shaping of democracy and democratic practices around the world. The panel was moderated by Ms. Ilina Mangova, a Chevening scholar and expert in public opinion and democratic governance. Besides Mr. Gill from the Magna Carta 800th Committee, Prof. Gordan Kalajdziev from the Faculty of Law at “Ss. Cyril and Methodius” spoke of “The Macedonian Magna Carta of Civil Liberties”, while another Chevening scholar Mrs. Natasha Gaber-Damjanovska, PhD, Judge in the Constitutional Court of Macedonia gave her overview on “Are the Civil Liberties Protected?”. This event was attended by over 50 guests including prominent judges, representatives from political parties, universities, embassies, the civil society etc. The questions and debate during the panel tackled some very challenging issues regarding the current state of civil liberties in Macedonia and Europe. The panel to mark the anniversary of Magna Carta was a third conference organized by the Macedonian Chevening Alumni Association in the last several years. In this way the Macedonian Chevening community tries to contribute to the public debate in Macedonia and to raise awareness about funding possibilities through this Foreign and Commonwealth Office scholarship scheme. More information for this event can be read on the UK in Macedonia blog and the photos can be seen on the following link.